A Tale of Several Wallpapers ..

So began the task of stripping the "dining room" .. When the house was built in 1900 until (probably) the early 1980's our dining room was the kitchen. I am not sure who thought it would be "okay" to wallpaper over the entire wall of tiles and think it would look acceptable! However it did provide me with an interesting afternoon removing said tiles and finding 3 or 4 layers of wallpaper on top and several layers underneath!
On top we had a fairly plain anaglypta wallpaper dating from the early 1990s (I think) and this had been originally white, then mint green and finally a rather "miserable mushroom colour".
In the mess of wet wallpaper, it's hard to be entirely accurate, but under that it seemed we had a plain white with small flowers on, some inspiring 1960s print full of bunches of grapes and glasses and carafes of wine! It was a shame not to have been able to get any of this one off in one piece, but here it is in situ ... 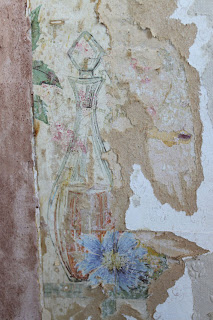 The tiles were so laden with layers of paint, it's a wonder they even stayed on the wall, but here you can see them in their full and glorious 1970s brown! 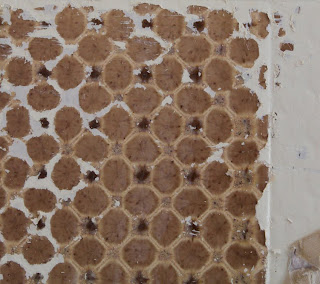 And I discovered the room had been split into two, with what would have been a scullery becoming the small kitchen area later and the other end containing a range and space for a large table. The scullery end right back under the wallpapers and tiles was originally a deep maroon red and the other end a dark green.
In a cupboard next to where the old range once stood was some lovely almost "oriental" style wallpaper. I have no idea how to date this .. maybe the 1940s? 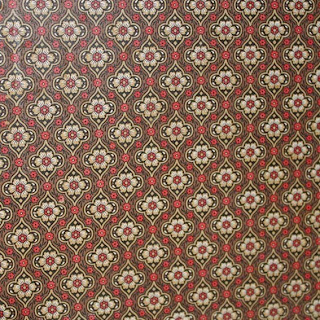 And before I finished stripping this room back completely, I found these "2 lovelys": 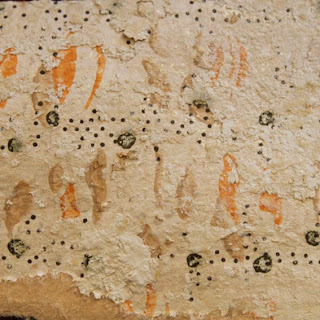 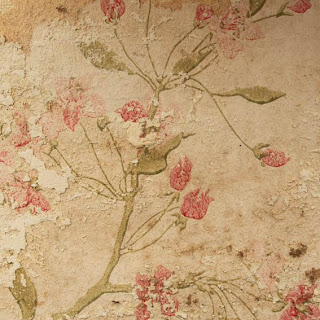 So many layers of pattern hidden in the dark for so long!
Posted by H at 08:40