We had huge problems when we recently purchased our Victorian house - was it a 3 bedroom or 4 bedroom? According to the vendors all the agents who had valued the house were happy to sell it as a 4 bedroom, even though the top floor is open plan with no door so doesn't comply with current fire regulations! The vendors had also never bothered to check out the way the room was "constructed" to see if it would comply with today's (admittedly rigorous) building regulations.

Days before we were due to exchange, our bank surveyor decided to revalue the property from a 4 bedroom to a 3 bedroom and decree the property much smaller for loosing its loft space floor footage. Despite the surveyor having actually visited the property himself, it wasn't until he sighted the structural engineers report (that we had actually commissioned for our own peace of mind), that he had a panic attack and revalued it, causing us much inconvenience and rearranging of mortgage arrangements right at the last minute!

Be all of that as it may .. now that we are actually living in the property we have invited some master builders round to appraise the level of work required to meet the structural engineers recommendations to bring the space "up to scratch".

One of them took a look at the floor joists (being thicker than would have been originally) and pointed out also, above the newer larger U PVC window there were a row of vertical bricks indicating that there was originally a small window there, a little odd to bother to put a window in a loft ... 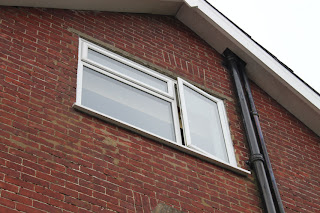 The space itself is also huge. One just "feels" that it would have been intended for accommodation originally. Especially in our house that was built for tenants and lodgers, why not utilise that extra space?

This builder also told us that if we could prove it was originally intended for accommodation, then the issues of it having been "a conversion" go away. The original deeds or better still maybe, the original plans would show this.

Away I went chasing firstly our solicitors, then our lenders in hot pursuit of our original deeds. Having drawn blanks from both these sources, I went directly to the land registry, and learnt something ...

Original Deeds are being destroyed one-by-one .. as the land registry record anything considered pertinent (and from what I can see this just means "of legal interest" - ie a right of way through the property or such") so these are added onto the "new deeds" for every property, and the original older deeds (all dusty and on parchment and just lovely) are not kept, they're chucking them out!

All that is being kept is 3 documents (see the land registry for a list of the documents) But the romance is gone! Our deeds are unfortunately in that category, the Land Registry informed me that our house was recorded in 1983, so the chances of the old documents surviving were zero. Had they been recorded recently, they may have still held them.

So with the old deeds officially "dust", I am chasing the builders plans. Last count, our local council doesn't hold them. It's off to the East Sussex Records Office for me, as soon as it practicable, to see if these documents still exist.

And the other part of the puzzle lies with the other half of our semi-detached ... Maybe our neighbours will know something!
Posted by H at 18:09