A 1919 half penny under the floorboards

It's been a while since I wrote.

There's a reason why ... mainly to do with the amount of time that life and our new dining room - the first room to be "attacked" - demands on time!

Thanks to "our mate Dave" .. now fondly known as "Dining Room Dave" .. the walls have been replastered, the missing bits of architrave and window ledges have been lovingly replaced and the "poor old room" is starting to shine under the love that is being bestowed on it.

No skeletons under these old floor boards, just a 1919 half penny ... which although in mint condition would be worth £35 - is sadly not - so only worth about £2! However it's an attachment with the past and nice to wonder whose pocket it fell out of .. all those years ago ...

"Our new dining room" started life as a humble kitchen in 1900 .. or 1905, or whenever this beast of a house was actually built (more to come on that subject later) .. but for a long long time, it's been a room that had a kitchen ripped out and then was never properly sorted. So tiles lurked under wallpaper and bits of missing skirting had been replaced with non-matching bits of skirting, and room proportions that demand some coving - had none ... and generally the room was forlorn and unloved .

You could see the evidence of where the old kitchen was in the 1960s and 70s .. our lovely sash windows had had their frames hacked out to fit in kitchen cupboards: 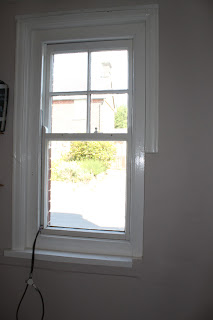 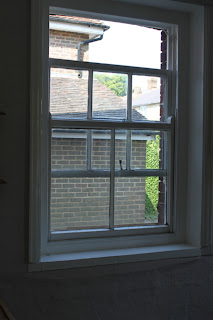 With the carpet up and our intention to sand and varnish the old boards, we have had to take out the poor old smashed up old hearth ... 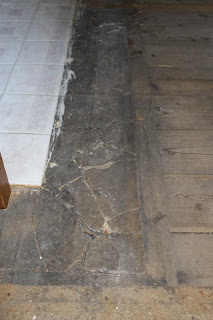 We have a 16 foot x 12 foot room now, but here you can quite clearly see where the scullery end of the kitchen was originally. In fact the other half of our semi - the neighbours house still has the room divided ... You can also see the original laquer stain, the Victorians used in the "range end of the kitchen room". This would have had a mat in the centre and is likely to be the very first floor covering the house ever had. 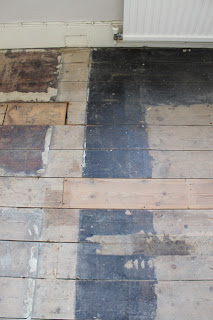 We're a way to go yet. The room needs its lovely coving, picture rail and skirting. "Dining room Dave" is laying slate tiles around the fireplace - our pride and joy - a reclaimed Victorian fireplace (fireplace post to come!) and I need to finish painting. The floor will then get sanded and then we start the varnishing ..
Posted by H at 20:33