How did it get to be nearly the end of November!

We had a mad October, getting the "Dining Room" finished (unfortunately the dining room now looks suspiciously like a Bedroom - My folks are visiting from New Zealand so we have had to take it over temporarily!)

After a couple of mini makeovers of the upstairs and downstairs bathrooms, we had to get the place "straight" for my folks arrival, but we're off again making a complete mess now and on a mission to get the hallways sorted before Christmas.

We always knew that "Fairlea" was one whole house when it was built, but subsequently the ground floor was made into a separate basement flat .. the old staircase was ripped out and a bathroom built in the downstairs hallway (circa mid 1960s) and then some 20 years later (definitely after 1983 as we have a plan showing the basement flat this year) the basement flat was opened back up and a staircase reinstated (complete with bog standard square spindles .. none of the hand turned ones like the next staircase up) ...

We always had imagined the staircases were in the same place though .. but the evidence after the yellow wallpaper had been stripped away suggests the stair has moved backwards somewhat in the newer version! 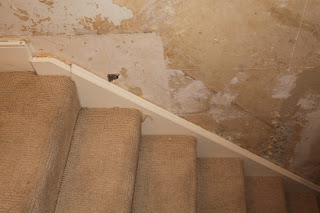