In with the new year and out with the old ... 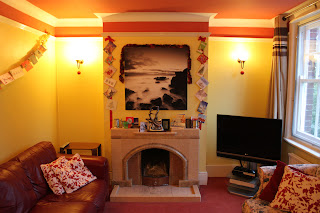 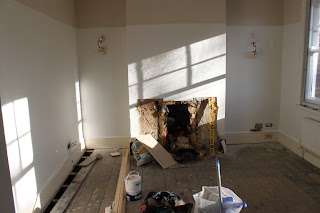 Okay, we're not quite there yet. But as always there is lots to do "behind the scenes" ... if you're going to do it, you may as well do it properly:

Rather than leaving the electric sockets stuck out like sore thumbs on the lovely old skirting boards, these have now all been channelled in.

The lighting arrangements have also had to change as some "bright spark" (sorry about that pun) in the past decided that the room only needed wall lights and no overhead lighting. We are keeping just 4 of the wall lights (not these simulated gold numbers from the 1980s either, probably just some nice subtle uplighters) and re-instating (if it ever had one) a large central overhead light as well. When Dave was foraging around under the floorboards above doing this job, he found the original gas pipe (capped at its' end) in the centre of the room where the old gas lighting used to be, I wonder just how long it took into the last century, before Fairlea had electric lighting ..

As for that red ceiling! What has always amazed us is that the dining room and the living rooms at "Fairlea" are pretty much the same size. However this room feels SO much smaller. That proves the "power of colour" and how dark tones can condemn you to live in a "cave" when it could be a "palace"!

Before anyone gets upset about us ripping down the ceiling roses, these ones were strictly of the B and Q "made out of eggbox" material variety! And besides a room this size would never have had 2, only 1 and intended to have a light in the middle of them somewhere, not just randomly suspended in space! Anyway someone had fun playing hoola-hoop with one! 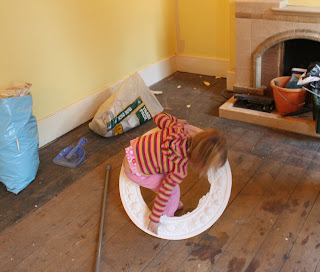 The picture rail is not original and it always looked wrong: For a start it's too high for the proportions of the room, and also it's rather large. Taking advice from the web (http://www.practicaldiy.com/carpentry/picture-rail/picture-rails.php)when we renovated the dining room, we lined up the new picture rail just above the door frame and then chose a small Victorian cornice to compliment it. The living room with it's gigantic "cardboard" coving and overlarge picture rail too high up the wall just looked "mickey mouse"! If we were in any doubt about the picture rails authenticity, all was revealed when it was removed and a large rose border pattern was revealed. We have since decided that whoever put it up, simply put it up right over the border assuming that was the correct place. 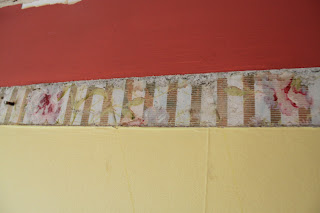 A BIG thanks to Dave and "Poppo" who have done all the work on the living room so far. "Poppo" is going on holidays now for 2 weeks and I have been forbidden to touch the living room, as he wants to finish what he has started. I am "allowed" to prime, undercoat and paint the new picture rails and Dave will be back to put the cornice and picture railing up sometime soon hopefully. Stay tuned! And as for "THAT" fireplace, that will be a separate post!
Posted by H at 11:32