To imagine how our new living room fireplace is going to look when it's sorted out: 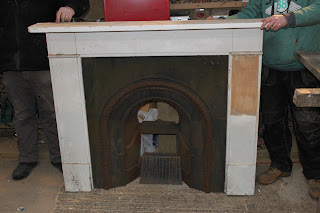 Last summer when we moved in to Fairlea and started our renovations, Victorian Fireplaces seemed a lot more commonplace and readily available. Having previously acquired our new dining room fireplace from Toad Hall Antiques in Heathfield for a bargain price, we headed back there to check out the latest selection. Disappointingly we discovered that the proprietor seldom gets any original Victorian ones anymore. A trawl of the net and some local reclamation yards also revealed a lack of selection. "No one is taking them out anymore" says one chap.

We found this place, as they had a range of their reclaimed and restored fireplaces on ebay: http://www.arcreclamation.com/ Having phoned ahead, we made the trek to Hampshire and found this marvellous place only with the aid of the sat nav chick shouting instructions, down a country lane.

These guys are getting well known for their range of reclaimed doors, but they also had a fair range of fireplaces. The difficulty being, although we wanted something plainer than the dining room, we also discovered we needed something large. The smaller fireplaces from bedrooms are much more common place, and it makes sense when you think, houses that are being  stripped will quite often have 3 or 4 bedrooms, but only one or 2 reception rooms. I also think that the reception rooms were much more used, so fireplaces didn't last as long. Evidence in Fairlea itself as the previous living room fireplace had obviously been replaced from Victorian to 1950s one, some 50 years after Fairlea had been built.

Anyway, the guys are Arc are incredibly helpful and we spent an hour and a half trawling their selection, until we came up with the idea of using this reclaimed surround (from an 1800s House in Midhurst that has since been stripped and turned into a Chinese Restaurant!) and the insert (which although looks Victorian is actually probably only about 50 years old.)

It's arriving on Monday and it has been stripped and repainted for us as well as the insert having been mended and completed and blackened. Although at £550, it has cost us more than the Victorian tiled dining room fireplace and new surround, we are feeling fairly happy we got it when we did, it's evident, it's going to be very difficult in a matter of years to get larger fireplaces at all, or if so, for £1000 or more.

On a recent visit to B and Q, I was horrified to see that new fireplaces can be more expensive than these reclaimed restored ones. It definitely makes financial and eco sense to reuse where possible! (And they have a history, which already makes them infinitely more interesting!)

We can't wait to see how it will look in our new living room! And once installed, it will be a fully working model unlike the other ones at Fairlea, which have been capped. Get ready to "warm your hands" in front of it ...
Posted by H at 13:53 1 comment: