Despite the "monstrous-hideous-tiled-solid-concreteness" of the 1950s fireplace .. we felt guilty about simply destroying it, and when it came out in one piece, even more so. I phoned a number of reclamation yards, we wanted no money for it, just for them to "take it away!", however no one is interested in these at the moment, may be it will change, in about 50 years ...
I also contacted these guys who specialise in 50's fireplaces (http://www.c20fires.co.uk/fireplaces/original/postfires.htm) however they are based in Manchester and there is a limit to how far someone will drive to get these things, even if they are offered FREE!
I also tried offering it on Freecycle, without so much as a nibble of interest.
The problem with it that it was SO heavy, taking 3 blokes to move it, even then only trundelling it on wheels, not actually picking it up. It's solid concrete, then coated in tiles and the hearth protruded into the room more than double the original Victorian slate hearth which we found in "okay" condition underneath.
In the end, it met it's end .. by being smashed into many pieces on our driveway and going to the tip in about 25 car trips! 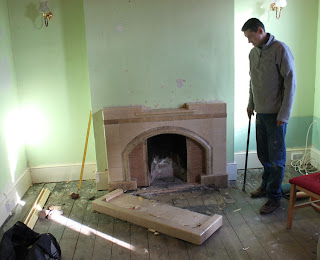 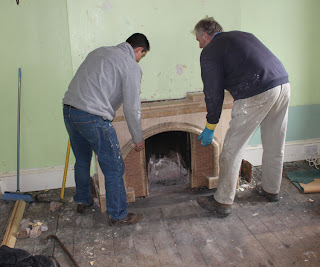 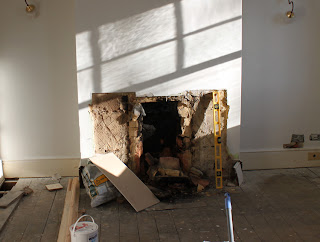 Removal of the 1950s fireplace reveals the size the original fireplace would have been .. The 1950s version has quite a narrow opening .. But the 1900 one a very high mantle 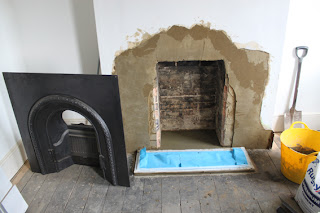 Dave has had to lower the mantle by using a metal insert and one row of bricks, then sort the inside out to accommodate the reclaimed one as well as concrete the inside to level it to the height of the new slate hearth (see covered here). Whilst the original slate hearth was in okay order, it doesn't comply with current building regs (too thin). 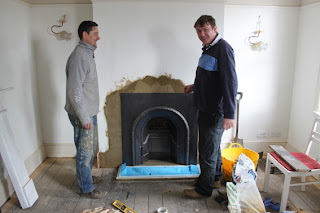 Dave checking the new insert will fit and my husband pretending he actually does DIY these days!! 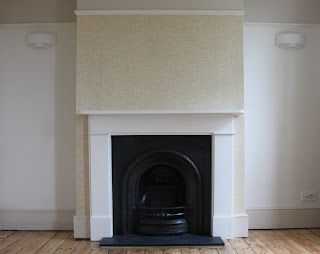 Our "new old" fireplace in situ and looking grand!
Posted by H at 13:38