What I found in the garden ...

The Plan for the Outside Back Space ...

Soon we will knocking down the appalling 1960s porch at the rear of Fairlea, which was added in the mid 1960s when the basement floor was converted into a separate flat. Best knock it down before it falls down! 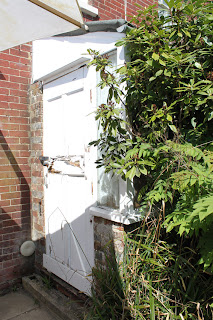 In preparation for "Demolition Day", we're clearing the pebbles outside .. which although look "okay", were forever being brought inside, so the kitchen filled up with more pebbles than Brighton Beach! So it looked like this: 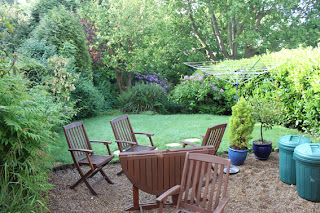 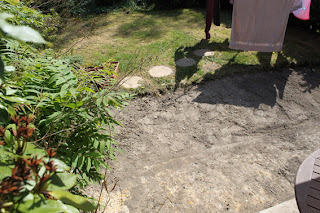 (okay, I admit, it looked better before, but sometimes things have to get worse to get better!) Eventually when 1960s porch and 1990s shed are gone from this space, decking will run right across the back of the house, creating a lovely warm "outside extension" to the kitchen and planned new downstairs living space.

After lugging about 40 bags of pebbles up the side steps to the front (where they're going to a good home), the back area is now clear and we can create an extended area of paving (to later support the decking) and bring the grassed area slightly closer to the house.

I got somewhat sidetracked from my job of digging out the soil for the extended paving line, when I started finding crockery fragments, and a lovely old glass stopper. This stopper is marked Holbrook and Co on its end, and research revealed that Holbrook and Co Worcester Sauce was very popular around the turn of the last century. 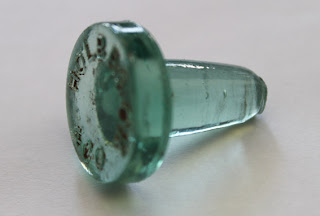 There were many fragments of old crockery, but nothing with any sort of date or distinctive pattern, although I am fairly sure that this came from a chamber pot, as the pottery is so thick and solid looking. 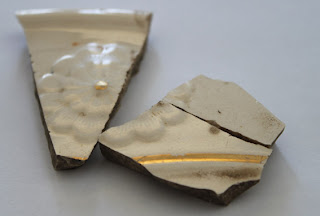 I am sure we will find more when we knock the old the shed down! No treasure chests or old valuable jewellery as yet though ..
Posted by H at 14:15