It's taken us a few months to get round to taking some photos ... but here are some "Before and Afters" of our second renovated downstairs area ...

Our "Basement Room" had lain damp and unloved for 4 years .. a dumping ground for unwanted items!

Being right next to the new kitchen it was obvious that this room should eventually become the new dining room. It desperately needed a relocation from the floor above - carrying plates up and down for dinner parties was never much fun, especially after a few glasses of wine! 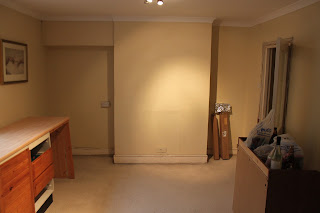 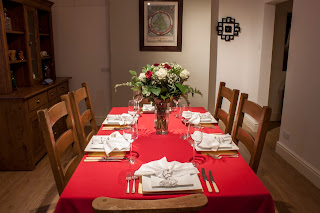 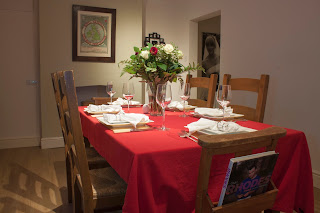 The room was lined with a polythene Damp Proof membrane on 3 sides which is held in place with metal battening on which plasterboard is affixed.

We also opened up the fireplace and added oak shelving, and removed the need for an awkward overhead  fuse board cupboard by building this wall in slightly all the way down.

Removing the door frames and doors,
as well as flooring with the same floating wooden floor throughout has made the
lower ground floor feel like "one space".

We used Dulux Gooseberry Fool 2 on the fireplace. The sage green colour complements
the wooden furniture and tones in the floor, We had very bad mould on the lower part of the walls this end of the room,
just due to the way the Victorians constructed their under ground rooms.
Over time damp had been creeping in and hadn't been treated in a number of years. 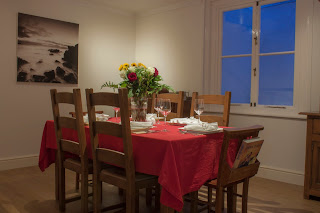 With mould gone, the room feels inviting even though 3 sides of its walls are underground!

Painting the light well with some coats of bright white masonry paint,
as well as removing the door and frame, has also lifted the light level. 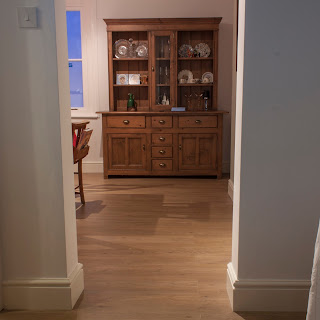 Looking through from the kitchen to the new dining room ...

A simple, relatively cheap way to open up a space is to remove doors and frames.

Email ThisBlogThis!Share to TwitterShare to FacebookShare to Pinterest
Labels: Basement Rooms, Before and After, Damp Problems, Interior Design